The earliest dolls were made from available materials such as clay, stone, wood, bone, ivory, leather, or wax. Archaeological evidence places dolls as the foremost candidate for the oldest known toy. Wooden paddle dolls have been found in Egyptian tombs dating to as early as the 21st century BC. 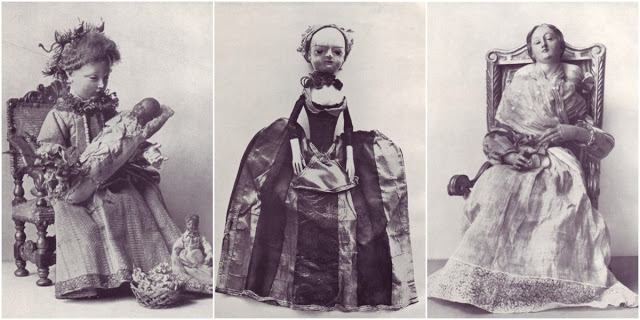 Dolls with movable limbs and removable clothing date back to at least 200 BC. Archaeologists have discovered Greek dolls made of clay and articulated at the hips and shoulders. Rag dolls and stuffed animals were probably also popular, but no known examples of these have survived to the present day. Stories from ancient Greece around 100 AD show that dolls were used by little girls as playthings. In ancient Rome, dolls were made of clay, wood or ivory.
Traditional dolls are sometimes used as children’s playthings, but they may also have spiritual, magical and ritual value. There is no defined line between spiritual dolls and toys. In some cultures dolls that had been used in rituals were given to children. They were also used in children’s education and as carriers of cultural heritage. In other cultures dolls were considered too laden with magical powers to allow children to play with them.
Research around why people perceive dolls as “creepy” has been conducted with some varying conclusions. A 2013 study by psychologist Frank McAndrew named doll collecting as one of the creepiest hobbies an individual could have. Of the topic of creepiness McAndrew stated that it was related to uncertainty, as something “might be dangerous but you’re not sure it is.” In a 2015 article for Smithsonian, writer Linda Rodriguez McRobbie stated that “Dolls inhabit this area of uncertainty largely because they look human but we know they are not.” Since the doll lacks ability to mimic, human brains at the most basic evolutionary tactic remain suspicious of whether or not it is human since they may expect the doll to mimic their own actions. This leads to feelings of physical coldness when the doll does not act the way one thinks it should.